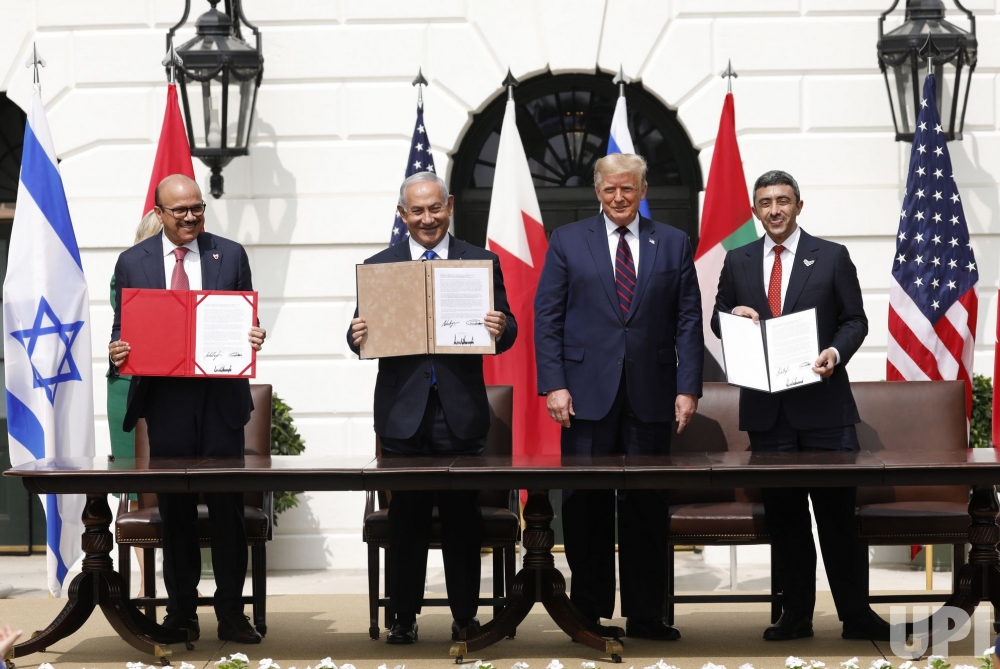 History very often come in varying degrees and it’s safe to say only men extraordinary make positive history. The names Donald John Trump, Prince Mohammed Bin Zayed, King Hamad al-Khalifa and Benjamin Netanyahu will forever be reckoned with in the annals of history. These history makers did what past and present leaders of the international system have been struggling to achieve in the Middle East for decades if not centuries. For over 70 years, all efforts to establish peace between Israel and her Arab neigbours proved relatively abortive.

This jinx was however broken in the South Lawn of the White House on Tuesday Sep. 15th 2020 as U.S. President Donald Trump hosted an elaborate ceremony which saw the United Arab Emirates and the Kingdom of Bahrain represented by their foreign affairs ministers formally sign an agreement tagged the Abraham Accord to fully normalize relations with Israel. The Israel – UAE deal which was brokered by Trump few weeks ago was followed with an announcement late Friday that Bahrain would also join in the peace agreement.

Trump is believed to be the only U.S. President to achieve such a breakthrough in Israel – Palestine conflict more especially with the enormous economic benefit accruing to the region courtesy of the deal. It’s expected that more Arab States would join forces with UAE and Bahrain in adopting a more progressive stance in the Middle East and embrace Israel for the prosperity of the region.

The agreement among other things will necessitate exchange embassies and ambassadors; partnerships in investment, tourism, direct flights, security, telecommunications, technology, energy, healthcare, culture, religious tolerance, the rightful recognition of Jerusalem as Israel’s eternal capital as well as other areas of mutual benefit. Already, the UAE/Israel relations has assumed a new positive economic dimension with the successful test run of international flights between the two nations few days ago.

The accord’s diplomatic benefits are not just limited to the Middle East as Serbia recently agreed to move its embassy to Jerusalem, while Kosovo announced it will formally recognize Israel. This is a major diplomatic triumph since it marks the first two European nations to move their embassies to Jerusalem, as well as the first Muslim-majority nation (Kosovo) to do so.

The Abraham Accord is monumental because the UAE is the first Persian Gulf State to establish full diplomatic relations with Israel, and only the third-ever Arab country to do so, after Egypt (in 1979) and Jordan (in 1994). The Kingdom of Bahrain is now the fourth.

The agreement could create advanced early warning systems against Iranian missiles; a connected command and control network for missile defense; naval operations in the Red Sea, northern Indian Ocean and Arabian Gulf; shared military technology; and a regular exchange of intelligence. Ghassan Khatib, a political scientist at Birzeit University, West Bank believes Gulf countries are interested in keeping Trump in power because they are very happy with Trump’s policy on terrorist Iran and unhappy with Obama’s. So they will do anything to contribute to the re-election of Trump.”

Iran’s terrorist activities assumed alarming rate in recent times following its domestic crackdown on human rights activists including wrestler Navid Afkari who was brutally executed. Iran received billions of dollars during the Obama administration following a deceitful deal it struck to halt its uranium development only to secretly continue.

Trump’s feat is therefore worthy of commendation. His nomination for the Nobel Peace Prize is also justified and deserving. The Crown Prince of Abu Dhabi, Sheikh Mohammed bin Zayed and King Hamad bin Isa bin Salman al-Khalifa of Bahrain have also written their names forever in history for their boldness and courage to rise to the occasion at a time the Middle-East so direly needed progressive thinkers to chart a new course. Posterity, reputation and integrity shall never forget them in dictionaries of uncommon global personality achievements.

The Israeli PM, Netanyahu has for the umpteenth time demonstrated to his critics that he is indeed a man that has the interest of his nation at heart. It’s glaring that the protests and calls for his resignation are the handiwork of unscrupulous elements who hate Israel and not a reflection of public opinion. Other Arab States including Kingdom of Saudi Arabia are therefore urged to emulate the UAE’s Prince and the King of Bahrain by embracing Israel to checkmate the terrorism and the expansionist activities of Iran.