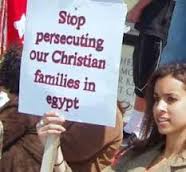 At least 90 Christians were kidnapped by Muslims in Egypt for ransom and conversion to Islam and later executed.

Bishop Macarius of El-Minia said that since June there have been 90 kidnappings of Coptic Christians, some of whom were killed even after their families paid their ransom, according to Halim Meawad, the co-founder of Coptic Solidarity.

A mob of Islamists burned down several Christian-owned shops in southern Egypt near Luxor, according to Jewish and Israel News.

The arson happened just hours ahead of the trial of Kyrolous Shawky, a Christian in southern Egypt who has been charged with blasphemy and contempt of Islam for simply liking a Facebook page.

Despite the overthrow of Mohammad Morsi, Egyptian Christians are still being disproportionately targeted by blasphemy complaints from Muslims; nearly 40 percent of the defendants in blasphemy cases are Christians despite that they only constitute about 10 percent of Egypt’s population.

Malays who leave Islam basically lose everything… They’re refugees in their own country and are treated as outcast. [Accepting Christ] is seen as one of the greatest sins that a Malaysian Muslim can do