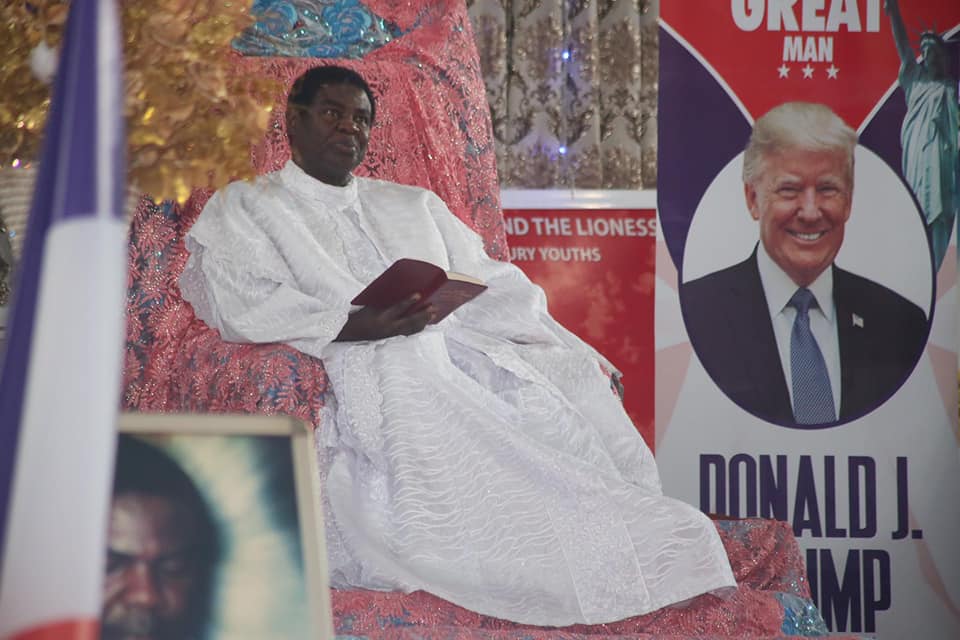 With barely few days to the U.S Presidential elections, Christians in West Africa — Nigeria took to the street on Sunday 25th October, 2020 for a prayer march in support of the re-election of US President Donald Trump.

The prayer march which was organised by the founder and leader of Living Christ Mission, His Grace, The Most. Reverend Professor Daddy Hezekiah MFR, International Mayor of Peace, The Lion of the Tribe of Igbo (Odum Ebo Igbo) and the Proprietor and Chancellor of the only private, licensed university in Imo state, Hezekiah University, Umudi — began with a 3-kilometre procession along the busy Hezekiah Avenue, followed by a few brief sensitization speeches on the reason and relevance of the historic event.

The distinguished speakers: Dr. Eze Ibekwe, Prof. B. O.G, Nwanolue, Dr. E. I. Wornu, Rev. Prof. Enoch Ajunwa, Dr Jane Achifusi and Amb. Dr Chinenye Duru, took turns to emphasize the need to show support for the re-election of the US President, Donald Trump, come November 3rd. The session was concluded by thanking His Grace, The Most. Rev. Prof. Daddy Hezekiah for strongly supporting Trump and urging American citizens to vote wisely to ensure the successful re-election of the president.

By the end of the rally, the crowd had joined the congregation in anticipation of the great leader, Daddy Hezekiah, who arrived shortly after, to preside over an intensely spiritual prayer session for the US President.

Drawing references from popular congregational hymn book, ancient and modern (which included hymn 262: Thy Kingdom come, O God; hymn 220: Jesus shall reign where’er the sun; hymn 307: Stand up, stand up for Jesus; and hymn 165: O God, our help in ages past) and buttressing his admonitions with texts from the great psalmist, King David, (see Psalm 35:9-17; Psalm 34:17-19 and Psalm 20). His Grace, The Most. Rev. Prof. Daddy Hezekiah — who recently made history as the first clergyman in the world to be awarded the prestigious United Nations (UN) award as ‘International Mayor of Peace’ — urged the embattled president to stand strong and stand in the strength of Jesus Christ as the only sure route to victory. He likened the temptations and persecutions befalling the US President as similar to that of the great King David whilst still under his predecessor, King Saul, and further stressed on the significance and implications of a Trump win for Christians all over the world and the nation of Israel.

The event climaxed at about 17:30WAT, with a powerful prayer for the President of the United States of America, Donald Trump, followed by a series of press interviews regarding the event of the day as well as other related issues locally and internationally.

On the reason for organising a prayer march for the President of the United States — Donald Trump, Mighty Prophet Hezekiah stated that he was moved to do so for several reasons. Chief among them is his sole altruistic affinity to the great, yet widely persecuted, president and the exigency of time in the build up to the elections. Other reasons He gave are; Trumps vivid support for Christians all over the world, especially those persecuted. His lucid efforts at preserving the sanctity of morals, law and order, right to life and the pursuit of freedom and happiness in the United States of America and all over the world. His unflinching support for the nation of Israel — who are the custodians and proof of the existence of Jesus Christ, the reality of the Bible, and the authenticity of Christianity. His bold stand up to world trade imbalance, exploitation, oppression and knavishness of world powers such as Russia, China, Turkey, etc. Trump’s commendable commitment to world peace, especially in Asia, Europe and the Middle East; as seen in Israel-Bahrain-UAE-Sudan peace agreement, Serbia-Kosovo economic normalization, North Korea nuclear weapon de-escalation and a complete paralysis of the economy of Iran — the world’s leading state sponsor of terrorism.

The Anointed Prophet of God, Daddy Hezekiah, believes that Trump’s win would surely have far reaching positive global effect in the world, including the Federal Republic of Nigeria, as it would ensure a reduction in the persecution of Christians in Nigeria. [Recall that Donald Trump is the only world leader who vociferously demanded an end to the killing of Christians in Southern Kaduna, Nigeria].

His Grace, The Most. Rev. Prof. Daddy Hezekiah who is also known as Victor burst into limelight during his university days in Zambia when the then President of Zambia, Kenneth Kaunda invited him to pray for him and his cabinet.

He is known to have destroyed powerful shrines in Southeast Nigeria through the name of Jesus including that in Anambra, Nigeria as well as Umugara, Nkwerre, Nigeria where he built his church.

Asides his philanthropic largesse, Daddy Hezekiah’s miraculous résumé has seen him command the pangs of death to be broken and destroyed even via a mere distress telephone call nevertheless the enormous geographical distance.

In the wake of Justice Kavanaugh’s nomination to the Supreme Court two years ago and threat from witches to lay a curse on Kavanaugh, Victor is said to have visited the venue of the meeting spiritually and neutralized the witches’ powers.

To read more about this man who raises the dead; heals the sick, blind, lame to walk, stops the rain and destroys evil shrines, please visit www.livingchristmission.org

13 thoughts on “SPECIAL PRAYER MARCH FOR U.S PRESIDENT DONALD TRUMP BY HIS GRACE, THE MOST. REV. PROF. DADDY HEZEKIAH. MFR”