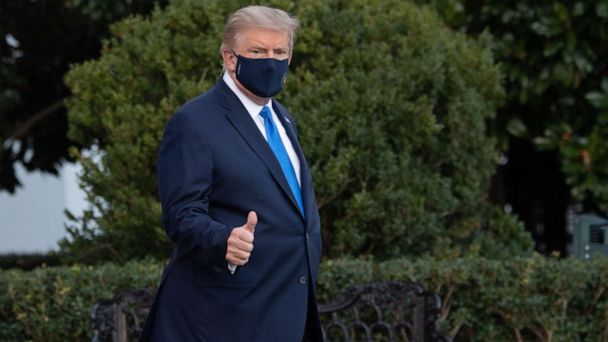 Trump’s positive test for Coronavirus is not a death sentence neither is it a call for celebration nor a moment to score cheap political point. For months now, the mainstream media have been agog with the fairytale that Trump isn’t concerned about the two hundred thousand plus deaths from COVID-19. They had many believe Trump never cared about Americans and those who contracted the disease. They had Americans believe they were alone in their struggle.

Well, with news of the President’s positive test, it’s hoped that these pathological liars will have a rethink. For one, the President has always put the lives and wellbeing of Americans first and taken it very seriously. He was first on the international scene to place a travel ban on China at a time when many openly described him as xenophobic and anti-globalist for this singular act. Upon the outbreak, President Trump went to work immediately to galvanize and mobilize first responders towards safeguard of American lives. There was hardly a day that went by (including weekends) that Americans didn’t see their President give updates on what is being done to address the pandemic. Within weeks of the outbreak, the President ensured the United States became a leading manufacturer of ventilators and stepped up testing to standards unmatched.

Today, the U.S has recorded over a 100 million tests and supplies ventilators to numerous countries who are not doing so well in fight against the pandemic. Similarly, the United States is set to launch vaccines in a matter of weeks to tackle the virus.

While the likes of Nancy Pelosi remain in their multimillion dollars luxury mansions doing nothing to protect Americans, Trump works round the clock in bid to ensure and uphold his solemn vow to protect and preserve America and its citizens. Unlike hypocrite Nancy whose speciality is to shut down the country and visit the salon, Trump works for Americans and is still donating all of his salaries for the welfare of Americans.

Consequently, Trump’s positive test for Coronavirus is further proof to debunk such ingenuity peddled by unscrupulous elements that Trump lacks empathy for Americans. He is one of us. Americans should understand that we are not alone in this fight against the virus. The President is doing his very best. As we continue to pray for the President and every American with the virus, it’s expedient Americans keep in mind the President’s demonstration of empathy through his selfless service to defeat the virus.

It’s a shame that the likes of former President Barack Obama, Bill Clinton, Speaker Nancy Pelosi and Democrats in their esteemed positions are lost in hate and only reluctantly issued a get well tweet to Trump after an initial silence.

There should be no place for hate in politics especially for a country like the United States perceived as the cynosure of democracy. It’s wrong for Biden’s supporters to think a time like this is a time to celebrate and wish death upon the President.

Democrats demonstrated by these that they are incapable of leading America to greatness and would only engender hate and destruction if they are at the helm of affairs. They are a disgrace and embarrassment to democracy which should be practiced in good spirit. Even Biden’s so called get well message came with a spice of sarcasm subtly suggesting Trump got the virus because he didn’t wear a mask. Frankly, this was unnecessary and uncalled-for.

Americans should take note of these and vote wisely come November 3rd.

Mr President, you are more than a conqueror. Testing positive to COVID-19 is not a death sentence. We are glad that you are already recuperating well from the infection. Do whatever your doctors ask you to do; eat well and keep trusting our God, He will see you through this. We your supporters and the saints are praying for you and the First Lady. Keep fighting the good fight. America loves you!