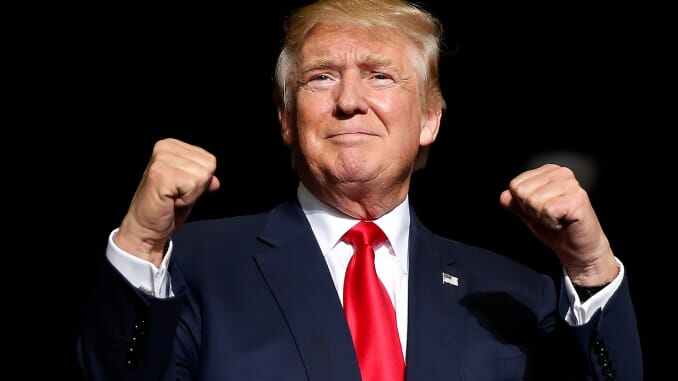 Trump has been in politics for just a little over 3 years and yet has achieved more for America than any other president or politician in U.S history. Despite the antics and distractions from the witch-hunt Democrats, President Donald Trump has proved beyond doubt that he is indeed the greatest President to ever govern America.

Before the ravaging Corona Virus which affected all global economies, the United States economy hit an unprecedented high and stood tall, over and above all economies in the international system. Unemployment in the U.S was at a record low, the stock market broke records on daily basis and manufacturers returned to America producing made in America goods again.

Trump undoubtedly is U.S greatest president and this assertion is empirical. He is the first sitting to fight for the working class in America. Under his presidency, American workers now earn better wages; more so, with the biggest tax cuts ever implemented by any government in U.S history.

Trump is also rebuilding the U.S. military with more than $1.5 trillion injected.

There is also the border wall which is nearing completion.

Ladies and gentlemen, there’s no doubt that Trump is working and he’s working for Americans. It’s very rare you see a President keep the campaign promises he made. Trump is doing it!

Despite the coronavirus pandemic which President Trump handled exceptionally well compared to other countries, America’s economy is on the rise again.

Trump in handling the virus was the first leader in the world to close borders with China even while House Speaker, Nancy Pelosi and Democrat Presidential candidate Joe Biden clamoured for a party in China. Within weeks of the outbreak of the virus in U.S., machines were manufactured in America and by Americans to step up testing.

Today, the U.S. has the highest test records in the world, about a 100 million tests done; which is over and above the entire countries in the world combined. Sadly, the mainstream media never reports this.

Trump is the first American President to donate his salary in office to the country. No other President.

He has annulled bilateral and multilateral agreements which America was being reaped off by other countries.

American farmers now get value for their labour. China has been made to understand that they have to treat U.S with the respect they deserve. It’s no longer business as usual.

In the Middle-East, there’s now hope for peace. For decades and generations, the Middle-East never knew peace. No other President in U.S. history has come close to what Trump is doing in the Middle-East. He kept faith with the empirical fact and recognized Jerusalem as Israel’s eternal capital and also moved U.S. Embassy to Jerusalem. He has now put in place an agreement between Israel and United Arab Emirates that would completely transform the region into a business hub. This agreement has seen the UAE normalize and recognize Israel’s right to exist with likelihood to bring about similar pacts between Israel and her Arab neigbours. What a feat indeed!

Trump unlike other U.S Presidents has also established cordial relations with North Korea’s Supreme Leader, Kim Jong-un. He is the first U.S. President to visit North Korea and did this when he visited North Korea’s side of the Demilitarized zone June, 2019. It’s therefore safe to say that under Trump’s presidency, U.S – North Korea relations has assumed a new positive dimension.

What more needs to be said? Trump is a hero, QED! This is not an overstatement as with the aforementioned. He has done so much despite the distractions and impeachment hoax. It’s only fitting and proper to give honour to whom honour is due and commend the 45th President of the United States Mr. Trump for these uncommon achievements.

His commitment ever since assumption of office on 20 January, 2017 has been the safety and security of Americans and it is only wise to give the needed support.

The great people of America are hereby advised to stand up for their president in his reelection bid come Nov 3.

The great records by Trump’s administration are glaring and must be sustained for the best interest of America in the next four years.

This is not to say that President Trump is perfect but anyone who does outstanding work must be honored. He deserves a second term in office so America’s glory as the most powerful nation in the world would remain non-negotiable and be preserved.

Fact remains, Biden is not an option. A man who spent 43 years in politics with nothing to show for it; including serving as Vice President for 8 years. He could not fix America and America had more racial killings under his administration. Why should America trust such a waste of a man again?

Is it Pelosi? She’s been in congress for 33 years; yet the biggest hypocrite ever. Just like the Pharisees, she believes laws are only for peasants. A disgrace of a woman. She’s been preaching so much about mask wearing and through instrumentality of law ensured businesses stayed closed but was caught breaking same law.

Americans, are these the people you want in office? Lousy Democrats who have spent donkey years in Washington; with nothing to show for it? It’s sickening to think of an America that would be ruled from the basement by these hypocrites.

Dear Americans, let’s stick with the hero we know. It’s Trump or nothing!!!