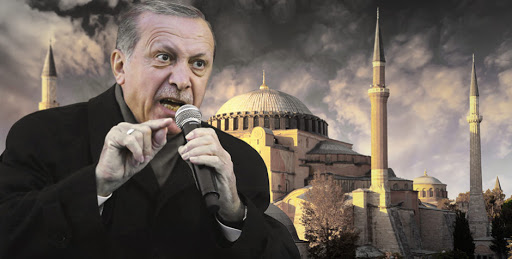 In yet another attempt to promote his rapidly spreading Turco-Islamism agenda against Christianity, distort history, and erode the Christian legacy surrounding the historic Hagia Sophia Cathedral; Turkish President, Recep Tayipp Erdoğan on Friday 24th July, 2020 led the first Muslim prayers since 1934 in the Hagia Sophia – a 1,500 year old Christian edifice located in Istanbul, Turkey. The Cathedral which was conveniently pronounced a Museum in 1934 was converted to a mosque recently by Erdoğan following a fraudulent ruling via his machination.

More disturbing is the silence of international entities which greeted this injustice, including UNESCO who watched as a recognized World Heritage Site was converted to a mosque.

It remains to be seen if the likes of United Nations, António Guterres, Amnesty International, European Union and mainstream media would have sat back and watched if this were a Mosque converted to a church. Of course, we would have had countless UN resolutions and global outrage criticizing such as insensitive domineering religious move. Till date, there is nowhere in the world where it’s been reported that a building that was constructed “from inception as a mosque” was converted to a church.

It’s important to note that the decision by Turkey’s President Erdoğan to convert Hagia Sophia to a mosque was not made because mosques in Turkey are insufficient for Muslim worshippers but purely to erase the Christian heritage in Turkey.

With over 90, 000 mosques scattered across Turkey and 4,000 located in Istanbul alone, including the historical Blue Mosque which sits magnificent and adjacent to the Great Hagia Sophia; this needless conversion is yet another attack on a historical landmark of Christianity, and a vile attempt to propagate religious intolerance in Turkey.

It will be recalled that the Byzantine Emperor, Constantius commissioned construction of the first Hagia Sophia Cathedral in Constantinople (present day Istanbul) 360 A.D. Following a series of fire incidents, the cathedral was reconstructed in 415 A.D for the second time before Emperor Justinian “I” demolished and rebuilt the magnificent edifice 537 A.D which stands today.

In the first church service in the “new” Hagia Sophia held December 27, 537, Emperor Justinian is reported to have said, “My Lord, thank you for giving me the chance to create such a worshipping place.” It is this historic place of Christian worship which has stood since time immemorial that Erdoğan woke up one morning and pronounced a Muslim heritage.

The Hagia Sophia Cathedral was also famously used for the Christian ceremony and coronation of Emperors in Byzantine era. This edifice was converted to a mosque first in 1453 following the defeat of the Byzantine (also known as the Eastern Roman Empire) by the Ottoman Empire. The Hagia Sophia became a museum 9 years after the establishment of the Republic of Turkey. Turkey’s emergence as a secular state was preceded by the defeat of the Ottoman Empire in 1918.

The debate here is not about the series of conversions or the rights of the Turkish Government to do so but simply on the fact that the Hagia Sophia is a holy Christian foundation and is now converted to a mosque out of sheer wickedness, jealousy and perfect hatred that the radical Muslims have for God and Christianity.

It is very disheartening that notable world Christian leaders have intentionally kept mute over this all important challenge to Christianity. The likes of Pope Francis and the Archbishop of Canterbury, Justin Welby, instead of fighting for the cause of Christians across the globe, are busy having good rapport with the radical Islamists.

Without any fear, we maintain a stand that Turkish Government should reconvert Hagia Sophia into a church which it was ab initio. The attitude of the mainstream media and U.S. Democrats over this issue is equally condemned. They did not attack Turkey as they do in matters concerning President Trump. There are repercussions to this.

We implore international entities to stand up for once and tell the truth that this piece of architecture is Christian from all empirical facts. It’s brazen injustice to suggest otherwise.

As the world rallies towards renewed calls for equality and end to discrimination against blacks #BlackLivesMatter, it’s important international entities and personalities realize that an injustice of this magnitude is catalyst that may engender a more sinister and unjust society. For black lives to truly matter, all human lives should matter; including the Christian population and heritage in Turkey. Turkey must be called to order.