KILLING OF CHRISTIANS IN NIGERIA – THE INTERNATIONAL COMMUNITY MUST ACT! 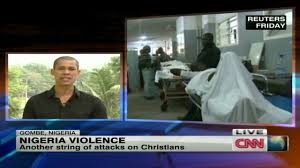 The bloodletting yet again persists. In Nigeria, scenes like this now appear more stale and less petrifying as the consistent gory, barbaric acts of the dreaded Boko Haram terrorist group have become now, very much regularized as an odd norm. The next village attacked, the next church burned, the next bus bombed or next man beheaded, whose lifeblood taints the soil red is at best a statistic and at worse an approximate.

The Nigerian President, Muhammadu Buhari, appears to be surprised and overwhelmed. He believes rehabilitation, foreign scholarship education and financial compensation is the best way to ‘win the hearts’ of Boko Haram and encourage them to repent whereas their victims which include young soldiers, school children, road travellers, Christians and Christian leaders in churches and in communities in their thousands are compensated with mass burials and fancifully worded condolences.

The President Buhari refers to the world’s deadliest terrorist group as a group of ‘misguided brothers’.

The world must know that Nigerians are hurt far beyond endurance. The world must hear and the world must see how some northern Nigerian leaders in corridors of power (including the president) aid and abate terrorism by their actions and inactions.

The world must see also, how freedom of religion is being swept under the carpet in the continuous killing of Christians in Nigeria, to pave way for radical Islamization.

Terrorism in Nigeria has taken more lives than the deadly Corona virus #COVID19 has recorded; hence requires even more urgent attention.
The international community must act to save Christians in Nigeria. Nigeria’s President, Buhari and cabal (El Rufai, Oshiomhole, Boss Mustapha, Ahmed Tinubu and Abba Kayari) should be placed on international travel ban and charged for crimes against humanity. It’s also necessary for the United Kingdom to stop Buhari from continuously visiting the UK for medical terrorism, while his countrymen are butchered on daily basis.

Tags:
Previous Article
CHINA: THE DOYEN OF COUNTERFEIT
Next Article
FIGHT AGAINST COVID-19: NIGERIA MUST NOT STOP CHRISTIANS FROM CELEBRATING EASTER

FIGHT AGAINST COVID-19: NIGERIA MUST NOT STOP CHRISTIANS FROM CELEBRATING EASTER
civilrights March 31, 2020