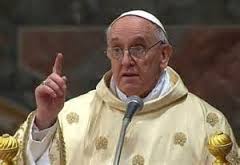 Pope Francis repeatedly told Muslim audiences during his first official visit to the Middle East that religious freedom is “a fundamental human right” and that governments must allow people to choose their own faith.

“Religious freedom is in fact a fundamental human right and I cannot fail to express my hope that it will be upheld throughout the Middle East and the entire world,” the pope said in a May 24th address to King Abdullah II, ruler of the Hashemite Kingdom of Jordan, and Queen Rania at the Al Husseini Royal Palace in Amman.

The Hashemites are direct descendants of the Prophet Muhammad.

Quoting from his predecessor, Pope Benedict XVI’s apostolic exhortation, Ecclesia in Medio Oriente, which called religious freedom “the pinnacle of other freedoms,” Pope Francis continued: “The right to religious freedom ‘includes on the individual and collective levels the freedom to follow one’s conscience in religious matters and, at the same time, freedom of worship….[it also includes] the freedom to choose the religion which one judges to be true and to manifest one’s beliefs in public.’”

Pope Francis repeated the same message the next day in his meeting with President Mahmoud Abbas and other Palestinian officials in Bethlehem.

While expressing his “profound hope” that “peace will be pursued with tireless determination and tenacity,” the pontiff once again stressed the need for religious freedom.

“Respect for this fundamental human right is, in fact, one of the essential conditions for peace, fraternity and harmony,” he said.

On May 26, the final day of his three-day pilgrimage, Pope Francis met with Sheikh Mohammed Hussein, the grand mufti of Jerusalem, and the president of the Islamic Supreme Council at the Dome of the Rock to mark the 50th anniversary of Pope Paul VI’s historic visit to the Holy Land.

“Dear brothers, dear friends, from this holy place I make a heartfelt plea to all people and to all communities who look to Abraham: may we respect and love one another as brothers and sisters! May we learn to understand the sufferings of others!” the pope said.

“May no one abuse the name of God through violence!” Pope Francis told the Muslim religious leaders.

Muslim dominated countries such as Iran show zero tolerance to people or persons who are not Muslims in their country.

Christians are reported to have been killed in mass in Egypt, Syria and a host of middle east Islamic countries.

Most recently a pregnant woman who has now delivered was sentenced to death by an Islamic led government in Sudan simply because she is Christian.

Iran is notorious for enshrining in its constitution the phrase ‘Islamic Republic of Iran’ which prohibits other religions.

Muslims have a mosque situated in the Vatican City were the Pope resides.