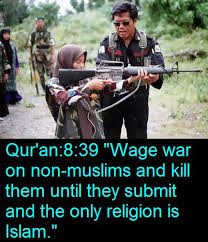 Muslims in Somalia seized two Christians, a mother of two daughters and her cousin, and after calling the entire village to gather together, they beheaded them in cold blood.

The Muslims had the woman’s two daughters, ages 8 and 15, watch their own mother get beheaded. The mother’s name was Sadia Ali Omar, and the cousin who was also beheaded was Osman Mohamoud Moge.

The 8 year old daughter weeped and begged for someone to save their mother, but nobody came, and the two innocent girls had no choice but to endure the gory sight of their beloved being savagely decapitated by these heathens. Before they beheaded them, the Muslims proclaimed:

One resident said that they were captured after suspicions were raised because the two Christians were not attending Friday prayers as frequently as is expected in Muslim lands.

The two people who were killed on many occasions did not take Friday prayers seriously, especially Omar, who claimed that she was praying in her house

The two daughters were taken in to an undisclosed location for protection, and still there is fear that the Muslims will try to track them down to slaughter them just as they did to their mother. One resident said:

This is just one of the stories that escaped the indifference of the media toward the suffering of Christians. There are countless others that have gone unreported. Imagine how many martyrs there are, which have not even been grasped by our knowledge. Idleness in the face of evil is just another form of idolatry. We can no longer be careless, there is no excuse. We either help the persecuted, or join the world. This is the only choice we have.