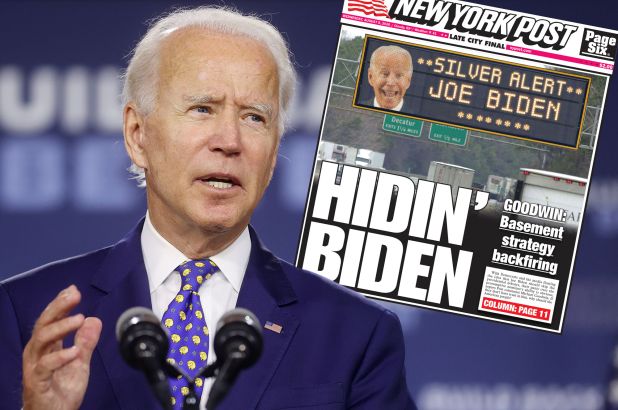 Basements are often viewed as a place where items such as boiler, water heater, fuse box, air-conditioning system, electrical distribution system, cable television distribution point and even car parks are located. It’s not exactly the kind of place you would expect a U.S presidential candidate to make his permanent abode. Well, believe it or not, yours sincerely, Joe Biden, the Democrat candidate for the White House, is permanently domicile in his basement for phobia of having to answer to salient questions on quest to be president.

More worrisome is the fact that the media and Dems seem to think it’s perfectly okay to elect a man who is scared of addressing his own countrymen. Biden for the best part of his campaign has indulged in a hide and seek game with the media. He seldomly comes out of his basement. When he does, he reads a speech with the aid of the teleprompter and his aides whisk him off without according the media firsthand opportunity to ask real policy questions. Of course, CNN thinks this is a great idea. It remains to be seen if Americans would succumb to elect a leader who can hardly put sentences together without the aid of a teleprompter.

For a fact, Biden’s mental alacrity is in doubt. This scenario played out in the recent hastily arranged interview which the Democrats staged following mounting pressure to prove Biden’s cognitive ability. Joe sat and read out answers from the teleprompter, in rather bizarre manner to a cooperative journalist who nodded sheepishly like an agama lizard. Despite how easy Joe’s task was in the so called interview, he still managed to forget his lines with remarks, ‘I lost my lines.”

Biden’s incoherent speech and habitual public embarrassment may be the explanatory variable Democrats prefer to hide him from public scrutiny and encourage to sit tight in his basement and devour ice cream. These fears perhaps explains claims by Joe’s fiercest critic that there should be a drug test before the debates to ensure no foul play or attempts by Dems to inject Joe with drugs in bid to stabilize. Is Joe that bad?

Joe is also reported to have blabbed incoherently recently while trying so desperately to link coronavirus deaths to President Trump. While delivering a speech in Pittsburgh, Pennsylvania on August 31 2020, Biden made comments which left listeners baffled and unsure of what he meant. Biden said, “COVID has taken this year, just since the outbreak, has taken more than 100 years. Look, here’s, the lives, it’s just, it’s uh mean think about it. More lives this year than any other year for past 100 years.”

America, is this “your” President?

Come September 29, October 15 and 22 when the presidential debates holds, Americans and mainstream media should go beyond celebrating Joe Biden for simply showing up for the debates, standing up straight or not sleeping through the session. Joe must answer to Americans and explain his son’s dealings with the Russians; his role in the unmasking of General Flyyn and racist rhetoric which dates back to his days as a Senator in the 70’s. He must explain why his 47 years in politics wasn’t enough to fix racism in America, including 8 years as Vice president. His role in the Black Lives Matters protests and why members of his campaign were caught providing bail fees for violent protesters arrested by law enforcement. He must explain to Americans his silence and refusal to condemn the brutal murder of police officers by supposed peaceful protesters. He owes Americans explanation on his support for China and why he criticized Trump when he banned travel to China amidst the Coronavirus pandemic.

Joe must talk and talk he should. Americans deserve better; they should keep in mind that the cynicism of today is indeed the reality of tomorrow. The job of being President of the United States is not given based emotional bias, prejudice or pity. It’s trust that must be earned. Thus far, Trump has proven beyond doubt and demonstrated that he has the charisma and character to lead the United States to greatness. The economy reached unprecedented heights under his leadership and on the international scene there’s a historic breakthrough in Middle East peace talks; never in history!

If Joe failed as a Senator and Vice President for 47 years, America, you need no soothsayer to tell that the man will fail again even as a President. If Trump could achieve these in 47 months, he deserves four more years!

10 thoughts on “WILL JOE “HIDEN” CRAWL OUT FROM HIS BASEMENT FOR THE DEBATES?”