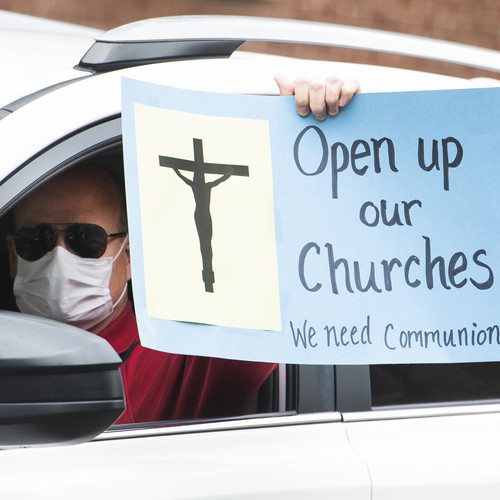 The law by the Governor of California, Gavin Newsom, to ban “singing” in churches in California can best be described as hypocritical with an acerbic persecutory undertone.

According to Newsom, a gathering of less than 100 worshippers observing social distancing while singing and worshipping, pose a greater threat than the thousands of people permitted by the state government to defy all social distancing rules while protesting police brutality last month. A typical left- wing Democrat hypocrisy!

Such a draconian law enacted by a Liberal Democrat Fascistic Governor, only represents a direct affront on #Christianity and is being masked as some drastic measures to curb the spread of COVID-19.

Without doubts, Newsom is leading a direct attack on Christians in an unconstitutional, tragic, hypocritical and hateful manner.

Seun Feuht, a worship leader at Bethel Church described the order by Newsom as an “unprecedented attack” on the freedom of worship as entrenched in Article 18 of UN Fundamental human Rights of 1948.

The 36-year old father of four lamented the ugly situation saying that he never envisaged a day like this would come in America where Christians would not be free to worship God. He noted with dismay, sharing Instagram images of himself leading worship in hostile countries years back in Iraqi and North Korea; juxtaposing these with California where worshiping God has now become a crime.

Similarly, Feucht bemoaned the terrible situation in California stating that,

“for the last several weeks, tens of thousand of people have been gathering outdoors in cities all across California and they have been screaming and chanting and protesting, and all the while state officials are encouraging them as they do this.”

For a nation founded on the tenets of Judeo-Christianity as reiterated by President Donald J. Trump in his 4th of July speech at Mount Rushmore; Newsom’s attempt to stifle and censor Christians’ mode of worship in his state, is only a piece of the greater puzzle by the radical left to erode America of all her foundational values, especially those rooted in Christianity.

Over the last few months, America has seen a series of brazen attacks on churches, with attempts to burn down these sacred places of worship without reason whatsoever. With the news of a ban on singing in California, there might just be a pattern of persecution unfolding in a land which has freedom of worship constitutionally enshrined.

Christians all over the world should speak up against this ban in California. Singing is an integral part of Christian worship and any attempt to prohibit or ban such is a denial of the first amendment and violation of right to freedom of conscience, thought and religion.