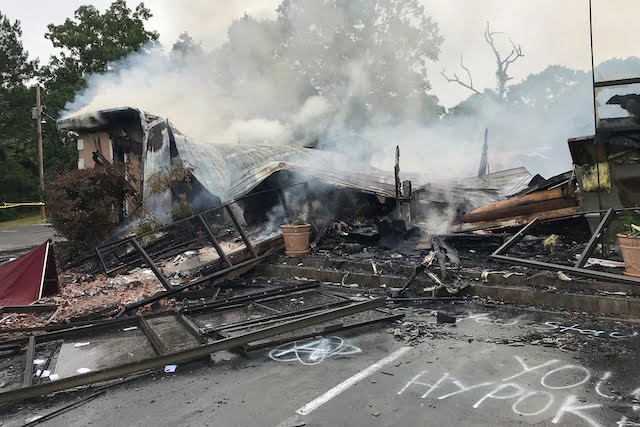 There was once a time the news of a Church being burnt was peculiar only with China, third world countries and Muslim countries. Churches were considered sacred at least in America. America was where Christians had the freedom to practice their faith without fear of molestation and persecution. Well, not anymore. Some evil degenerates who parade themselves as protesters and activists are now in the habit of burning down Churches. These relegates have perfected the act of burning Churches in the United States and even successfully carried out the heinous crime with impunity mostly because of the encouragement they receive from Democrat governors in their States.

Over the past few weeks, the list of churches burnt in America under the guise of so called protest include the First Pentecostal Church, Holly Springs, Mississippi where an atheist group symbol was left at the scene. There was also the St. John’s Episcopal Church on Lafayette Square across from the White House, known as the church of presidents, which was set on fire during protests in Washington.

Churches with predominantly black congregation are not left out of these attacks. In fact, they seem to be more in number; further raising doubts over the agenda of these protesters who masquerade as human right activists and agitators of equality for blacks. African American churches burnt in the United States include the Briar Creek Road Baptist Church – North Carolina, God’s Power Church of Christ – Macon, Georgia, Glover Grove Missionary Baptist Church – Warrenville, South Carolina, and College Hill Seventh Day Adventist – Knoxville, Tennessee. The rhetoric here is, what exactly did these churches do to these miscreants to warrant burning? What is the correlation between the Church and the brutal murder of George Floyd? Was it the church that killed George Floyd? Why the church? Why haven’t we heard of a mosque being burnt in America or any other country? Of course, these cowards know what the reaction would be.

It’s clear that the individuals behind these heinous attacks on churches in America are enemies of state and terrorists. They don’t mean well for America and only want her destruction. It’s also shameful that the leftists including Democrat presidential candidate Joe Biden and former President Barrack Hussein Obama condone these attacks. Joe Biden’s people are known to have bailed some of the violent protesters who were arrested by police for their nefarious activities. Same Biden, the chronic racist who in his days as a young politician opposed moves to desegregate America same way he recently displayed his resentment for blacks by describing them as not black enough if they choose to vote for Trump.

It’s embarrassing what Mr. Barack Obama has reduced the status of former president to in America. Throughout history, there has never been a time like this where a former president still shamelessly meddles directly in politics. Former presidents (an esteemed enviable well respected position) are known to retire quietly and allow their successor handle the affairs of the country, but not so with shameless Obama. He wants to create confusion and division among Americans simply because his anointed candidate Hillary Clinton failed in her bid to succeed him. If George Walker Bush had done same desperately as Obama is, certainly, Obama wouldn’t have succeeded him.

It’s also a shame the role of the media in all of this; especially CNN. They hardly report arson attacks on Churches and make it seem it’s pretty cool to burn Churches. For justice and equality however, the media and democrats must shun hypocrisy and embrace genuinely, the very fact that all lives matter including Christians and churches in America.