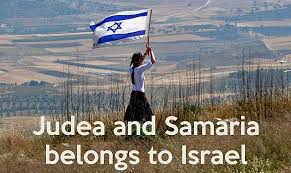 Israel has every legal right to exercise sovereignty over Judea and Samaria (West Bank). Historically, these cities have always been theirs. The United Nations, European Union and international community have absolutely no right to suggest otherwise. The statement suggesting that by July 2020 West Bank will be ceded to the Palestine is absolutely an overstatement, fundamentally unacceptable and completely fallacious in nature. Such odious and nihilistic statement was made out of venom, bitterness and anchor of loathe by enemies and haters of Israel.

For one, in 2008, Russia went into battle with Georgia and violently annexed South Ossetia and Abkhazia – two Georgian territories.

In 2014, Russia again used its political influence and military might to take advantage of the conflicts within Ukraine and annex the Autonomous Ukrainian region of Crimea.

In 1959, China bullied its way into the acquisition of the small independent nation of Tibet, exiling their teenage ruler, the 14th Dalai Lama who was 15 years as at that time and killing thousands of Tibetan resistance. China used propaganda on the outside and brutal force on the inside to break the resolve of the people of Tibet.

70 years later, Tibet is still under China, Dalai Lama is still in exile and neither the United Nations – UN nor the European Union – EU have taken significant steps to ensure justice.

In the year, 2020 amidst the COVID19 pandemic, reports of China bullying Vietnam over Vietnamese territorial portion of the South China Sea, has sparked wide condemnation globally. This comes after it had rejected a ruling in favour of the Philippines, in the dispute concerning the South China Sea to which it claims were ruled illegal by the Arbitral Tribunal of the United Nations, but surprisingly, there is no backlash from the European Union or sanction from the United Nations.

These two nations (China and Russia) have bullied their way to the forceful acquisition of territories under the nose of the United Nations and the European Union which only seems capable of flexing its might when it comes to nations such as Israel.

Despite winning the six-day war against Egypt, Jordan and Syria in 1967 and the right to territories which she claimed, Israel has continued to withdraw from these territories – first in 1982 regarding West Bank and then in 2007 involving Gaza strip – all in an effort to make peace. All efforts have remained futile as the principal aim of Hamas and other significant Palestinian party rulers is not to make peace but to destroy Israel from its rightful land.

It’s therefore mandatory on Israel to rise and take possession of its rightful inhabitance. For one, by way of international law governing ownership of land, Israel has fulfilled the prerequisite of historical landmarks to show presence and ownership compared to their neighbors who only migrated from Jordan. Historical artifacts clearly show Bethlehem Judea and Samaria as Jewish.

The Jewish territory was left vastly unoccupied after the exile of the Jews by the Roman Empire 132 AD. There was no sign of occupation by neighboring communities, legendary English writer, Mark Twain, notes in his book, ‘Innocents Abroad’. Twain whose real name was Samuel Clemens wrote in 1867 (book published 1869) when he visited the region; describing it as “A desolate country whose soil is rich enough, but is given over wholly to weeds.”

Throughout Innocents Abroad, Twain explicitly states that the area was desolate and devoid of inhabitants. His group entered Palestine from the north, passing through such sites as the Sea of Galilee, the Banias, Nazareth, Jenin and Nablus.

Riding on horseback through the Jezreel Valley, Twain observed, “There is not a solitary village throughout its whole extent – not for 30 miles in either direction. There are two or three small clusters of Bedouin tents, but not a single permanent habitation. One may ride 10 miles, hereabouts, and not see 10 human beings.”

Six hundred years before Twain’s visit, another famous visitor with a nom de plume was struck by the desolation in the region. Rabbi Moses ben Nachman, known as Nachmanides (1194-1270), fled Christian Spain for the Land of Israel. Upon arrival sometime in 1267, Nachimanides had this to say about the region in question: “Since the time that we left it, [the land] has not accepted any nation or people, and they all try to settle it… This is a great proof and assurance to us.”

It may be recalled that the name Palestine was historically given to the region by ancient Roman Emperor Hadrian to spite the Jews who revolted to challenge his authority. Thus, the Palestinians we see today are not necessarily Palestinians per say but they adopted the nomenclature for convenience and to further confuse those who are not familiar with empirical verifiable history. At best, they are migrants from Jordan who found it necessary to do so just before the Balfour Declaration in 1917 and with the widely publicized book of Mark Twain stating the obvious.

Historically, the area known as West Bank has always belonged to Israel. The area which was named for administrative convenience sometime in 1948 as West Bank to differentiate between the East Bank of the Jordanian River and the West, historically, is Jewish. The original name is Judea and Samaria, home to Israel’s holiest sites. It is home to Hebron the city of David, the historic capital during the reign of Israel’s greatest King, David. Bethlehem the birth place of Jesus Christ is also situated in Judea. How then could the architects of the United Nations conceive that a nation with such rich historical heritage would forfeit such a land for another?

These international bodies should leave Israel alone and also note that West Bank from inception is a legitimate Jewish city of Israel. The actions of Israeli Prime Minister Benjamin Netanyahu in seeking to assert Israel’s sovereignty in West Bank – Judea and Samaria anytime from July 2020 is well within the confines and mandate of the sovereign state of Israel and requires no permission of the international community. The clarion call here is for the international community to be properly guided; to respect Israel’s sovereignty as a nation and to desist from accusing Israel falsely of violation of so called international law. If Russia and china could do it illegally, there should be no stopping of Israel whose case is not only legal, but legitimate.