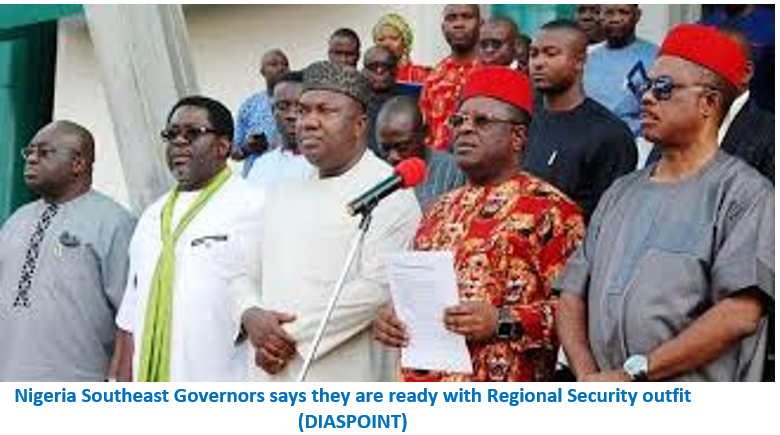 The southeast Governors in Nigeria are unapologetically condemned for their inaction towards the diminishing security and safety of the Igbo race. Their act of feigning ignorance to the looming mayhem as a result of the gradual and crafty invasion of the region by Fulani herdsmen is overwhelming. Being mandated with ensuring the security of their citizens, they are supposed to make security of their subjects a priority. However they prefer to fatten their pockets with the funds meant for the security of the citizens leaving them at the mercy of fate.

The Igbo region is continually being invaded by the Fulani herdsmen as they are aware of the irresponsibility of its governors, hence, capitalizing on that to make their way into the region. They are progressively trying out their strategies of invasion and takeover by making demands from the communities of which the governors resort to complying, thus giving them the confidence to proceed. A typical case is that of Umunyem community in Nkwerre Local Government of IMO state where the herdsmen falsely accused the locals of killing their cows and demanding a huge sum of N600,000.00. The state government and community leaders, including the police did nothing, instead negotiated the demand down to N200,000.00 not minding that the claim was unfounded. These leaders are obviously handing the communities over into slavery and continuous extortion from the Fulanis.

Statistics has it that a good number of communities in Igbo land have these herdsmen as occupants. These herdsmen carry out their nomadic activities on the farms of the indigenes of these communities, thereby damaging their crops, which is their source of livelihood. Yet, the governors and traditional leaders of those communities do nothing to protect the interest of their subjects and kinsmen.

Cases of threat and demands by the Fulani herdsmen have been on a regular occurrence especially in IMO state yet nothing is being done. It has been observed that most of these herdsmen are spies as a case was recorded in Nkpor community in Anambra state where a cobbler was found out to be a trained soldier. Not long ago, cases of lorries transporting a large number of northerners down to the east was observed and yet the governors are doing nothing.

One is then tempted to ask whether they have been bought over. Did they not see the proactive measure taken by their southwest counterparts by agreeing in one voice to form the Amotekun security outfit? On the contrary, they chose to wallow in their individual folly as Governor Obiano of Anambra state, a renowned drunk has lost sight of reality. Governor Umahi of Ebonyi is apparently a northerner as he prefers to build mosques rather than attend to the needs of his subjects. Ugwuanyi of Enugu state is obviously clueless while Okezie Ikpeazu of Abia state has refused to achieve nothing in his 2 tenures. Are we to speak of Hope Uzodinma of Imo state who has a track record of fraud way back at Onitsha (commercial hub of south east, Nigeria) and has been proven to be a very useful tool in the hands of the elite from northern Nigeria for the successful manipulation of the southeast, Imo state in particular?

Indeed, with this group and the shameless traditional rulers ready to betray their kinsmen for money at the helm of affairs, the Igbo race is a lost cause and the impending slavery of the region will be sure.

Well-meaning Igbos at home and in diaspora, including international communities are hereby urged not to keep silent at the broad day light robbery of the freedom of the Igbo race.