In saner climes, the national association of legal practitioners or the judicial council as it is called, serves as an institute for enthronement of justice, equity and fairness. It’s however sad that in Africa’s most populous country, Nigeria, virtually all the institutions of democracy seems to have been truncated, compromised and bought over by the ruling political party.

This trend was clearly visible when President Buhari unilaterally removed the Chief Justice of Nigeria, Walter Onnoghen and replaced him with an acting Chief Justice Mr. Tanko Mohammed (a man who only studied sharia law). At the initial, many analysts and stakeholders of good governance hoped that Nigeria’s Bar Association (NBA) and National Judiciary Council (NJC) would at least rise to the occasion and salvage what was left of Nigeria’s democracy.

Disappointingly rather, few days ago, the NJC dashed the hopes of well-meaning democrats with a politically motivated report masterminded by Nigeria’s President Buhari in which they recommended the confirmation of Mr. Tanko Mohammed, a man who did not go to law school, as the substantive Chief Judge of Nigeria, while Walter Onnoghen should be retired with full benefits. This decision has since prompted the embattled Chief Justice to purportedly tender his resignation.

It may be recalled that Mr. Onnoghen was in rather controversial circumstances, charged with corruption allegations by the President Buhari led government barely few weeks to Nigeria’s presidential elections. Analysts are of the view that charges filed by the Nigerian government were premeditated and predicated upon the need to install a Chief Justice who would be disposed towards giving a ruling that would legitimize the rigging done by the government to win the presidential elections when the case eventually comes before the court of law.

Political pundits in Nigeria are of the view that the rape on Nigeria’s judicial by President Buhari is unprecedented and the report of the judicial council disgraceful. The simple question that comes to mind in all of this is, what crime did Justice Walter Onnoghen commit to deserve the humiliating treatment meted out by Buhari and cohorts? If the crime was that he has about 500 million naira (USD1.5 million) in his account, what efforts have the Buhari government made to ascertain what other politicians in the ruling political party (APC) have in their accounts? A concerned Nigeria was quick to note that “The amount allegedly in Onnoghen’s account will no doubt be nothing to compare with if the actual figures in the accounts of the likes of Adams Oshiomole, Boss Mustapha, Mamman Daura, Rotimi Amaechi, Babatunde Fashiola, Orji Uzor Kalu or the president were to be revealed.

It’s an act of cowardice for Nigeria’s apex judicial body to take sides with the President. Does it mean the entire judiciary in Nigeria has been bought over by this current administration? It further begs the question what exactly is the role of the Nigerian Bar Association in checkmating the excesses of the ruling government and the indiscretion of the National Judicial Council.

The recommendations of the NJC underlines the height of mediocrity in Nigeria’s political system for a man who specializes only in Sharia law and who did not attend law school to be confirmed as a substantive Chief Justice of Nigeria. What possible contributions could such an individual make if cases on International law, land dispute, etc arises for Nigeria? It goes to show that this decision will only serve to plunge Nigeria into deeper anarchy. The court which ordinarily should be the hope of the common man for justice is obviously compromised since the headship now owes his allegiance only to Sharia law.

The National Judicial Commission and the Nigerian Bar Association are therefore called upon to retrace their steps and address this anomaly as a matter of urgency. The judicial in Nigeria should rise to their duty to serve justice to the common man and downtrodden. The world is watching Nigeria. 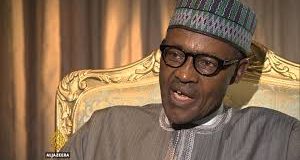