THE HYPOCRISY OF THE POPE – THE UNSPOKEN TRUTH #THE JERUSALEM DECLARATION 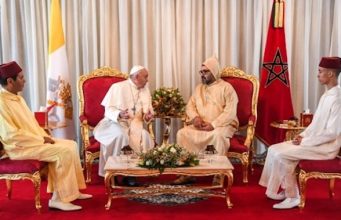 We condemn absolutely, the decision by the Catholic Pontiff, #Pope #Francis to join forces with the Moroccan King, His Majesty the King, Mohammed VI, King of Morocco to declare Jerusalem, Israel a “symbol of peaceful coexistence” for #Christians, #Jews and #Muslims on the first day of his visit to the #North African country. The Pope had on March 30, 2019 issued a joint press statement with the Moroccan monarch, pronouncing Jerusalem a “common patrimony of humanity and especially the followers of the three monotheistic religions”.

The question that begs for an answer is, which other religion shares or has holy sites and worship centres in the city of #Mecca other than Muslims? It seems the Pontiff may have forgotten so soon the historic injustice meted out to the Jews and how his actions, inactions and declarations with respect to #Israel have always been anti-Israel. It follows also that if we were to use the Pope’s logic, the Jews would lay claims to Mesopotamia which is the present day Iraqi where Abraham resided before moving to the Promise Land, so also Mecca which was once inhabited by Jews.

Interestingly, in Saudi Arabia the Committee for the promotion of virtue and the prevention of vice otherwise known as the Saudi Mutaween prohibits the practice of any other religion other than #Islam. Conversion of a Muslim to another religion is considered apostasy and could lead to a death penalty. The government does not permit non-Muslim clergies to enter the country for the purpose of conducting religious services. So also, #Catholicism is officially banned from being practiced in #SaudiArabia. Yet, the Pontiff has not said or done anything to stop this ugly situation.

Again, Christians are murdered in cold blood on daily basis in countries like #Pakistan, #Nigeria, India etc, yet the Pontiff has not deemed it fit to speak up or strongly condemn these dastardly acts rather he quickly condoled with victims of the mosque shootings in #ChristChurch#NewZealand. Genocide of Christians is ongoing in #SouthernKaduna, #Benue both in Nigeria; does it mean the Pontiff hasn’t heard of these? Can’t he call Nigeria’s President Muhammadu Buhari to order?

Also, while Israel has continued to suffer persecution in the hands of her neighbouring #Arab league countries including #Iran that vowed to annihilate Israel as a foreign policy statement, the Pope without any iota of guilty found it convenient to embrace and describe the #Palestinian leader, Mahmoud Abbas as a great leader of the Palestinians.

Further, the Pope’s recent support for ordination of Gay Bishops and advocacy for the Bible to be rewritten is clear indication that he has lost sanity and morality to lead the Catholic Church.

The Pontiff is strongly advised to desist from comments, actions and declarations that could portend danger for the safety of Israel. The nation of Israel have so variously been persecuted and oppressed by humanity in general from the days of the Roman conquest to the Holocaust by Nazi Germany. It compounds their misery for the supposed number one leader of a religion to be found lending support to anti-Semitism. If Mecca the Muslim capital cannot be divided, why should Jerusalem the Jewish capital be divided? If Christians have the Vatican as their undivided capital and the Muslims have Mecca, why should the case of the Jews be different? Would the Pope allow anyone to divide the Vatican? Never in history have we had any nation live with a divided capital city. For one, it would distort their territorial integrity and make them vulnerable to perceived enemy attack/aggression. How much more a nation like Israel surrounded by very hostile enemies whose primary objective is to wipe them out? Just as the French wouldn’t want anyone to split or divide their capital city Paris, so also the nation of Israel.

Today, the British hold tenaciously to distant territories like Gibraltar. The Chinese hold to Taiwan, Hong Kong and Tibet, while the Russians aggressively invaded and annexed Crimea; yet, these nations find it convenient and “morally right” to condemn Israel for its stance of survival and preservation of its sovereignty and territorial integrity. They condemn Israel for insisting that its eternal capital from time memorial Jerusalem shouldn’t be divided.

The peculiarities of the Middle-East region and the security threat posed to Israel makes it suicidal for any serious nation in light of realities to compromise cities strategic to its existences and survival. It’s a shame that these nations (China, UK, Russia etc) voted in unison at the United Nations questioning United States’ recognition of Golan Heights, a town habitually used by enemies as vocal point for attack, as Israel’s territory.

Historic artifacts posit clearly that Jerusalem is Jewish. Even the Cyrus cylinder discovered in Iraq and examined by CNN’s news correspondent Christiane Amanpour attest to Israel’s ownership of Jerusalem https://vimeo.com/62699236. Why then would the Pope and his cohorts suggest otherwise?

We appeal to the Pope to retrace his steps. This seeming act of cowardice to gain political popularity must stop! His call to be the Christian patriarch is premised on speaking the empirical truth. The international community must end this grave injustice to the Jewish people. The United States of America/The White House is commended for their unalloyed support for The Prime Minister of Israel and hereby encouraged to continue.