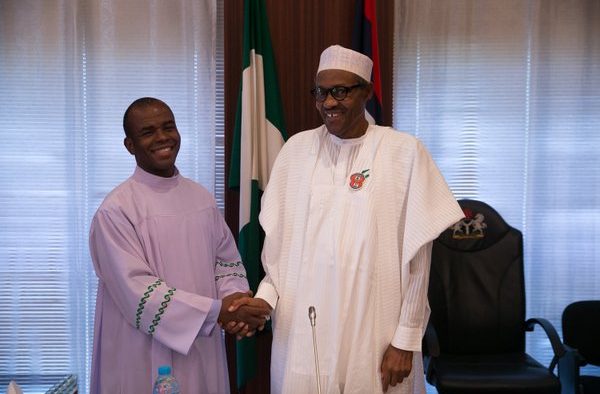 Nigeria’s rigged presidential election was without doubt eventful. It had a lot of gluttonous gladiators. One of such was a certain Catholic Priest by the name Father Ejike Mbaka. Father Mbaka as he is fondly called made his name through the funny antics of political motivated prophesies for politicians that they would take his country Nigeria from dungeon to paradise; only for things to get worse. In his usual fashion on Sunday 3rd December 2018, Mr. Ejike Mbaka openly disparaged the vice-presidential candidate of the main opposition in country the People Democratic Party (PDP), Mr. Peter Obi and his principal Alhaji Atiku Abubakar for failing to publicly donate funds towards the projects in his church, Adoration Ministries.

Consequently, the disgraceful clergyman predicted doom for Mr. Obi’s party at the then upcoming Presidential elections. This very act of desperation betrayed his penchant for exploitation and extortion of his gullible followers.

Interestingly, Mr. Mbaka has once again hit the heights of mediocrity coming out to claim glory for the just concluded elections which was declared in favour of the APC, asserting that the God of Elijah has avenged and put his detractors to shame. What a ridiculous ignominy!!!

In the words of a concerned Nigeria in our vox populi:

“For a fact, Mbaka is suffering from chronic dementia, juxtaposed in insatiable lust for money and information deficiency. How will he choose to ignore public outcry of injustice noticed in the elections? In revelation of the orchestrated mafia style of the APC in having results their way, the returning officer for Imo west senatorial district, Prof. Innocent Ibeabuchi in a leaked tape to the media told the world how he was placed under duress to pronounce Rochas Okorocha winner of the senatorial elections with a threat to his life. The catholic community should put a stop to the innumerable disgrace Mbaka has brought upon the Catholic Church in particular and Christians at large by stripping off his priestly robe. In the height of killings of Christians in the north, oppression, persecution, Mbaka kept mute (of course having been paid), but to chose to support an administration who has failed in their primary responsibility to protect lives and properties of citizens under their watch, wanton bloodshed went unabated bringing about division among citizens across ethnic and religious spheres. His actions are disappointing but doesn’t come as a surprise to many who have in-depth knowledge of his veiled mysterious background aiding the diabolic practice of his biological father through the altar. He is therefore warned to desist from using the name of God in vain for his personal gains in thwarting unsuspecting followers.

Putting the facts straight, this debacle is fiercely worrisome that a self-acclaimed man of God will aggressively be in pursuit of glory and reward for his pocket in claiming victory for rigged elections marred with the irregularities of doctored results in connivance with the INEC, massive underage voting in the north, ballot paper destruction in opposition strongholds, hired mercenaries from Niger with thumb printed ballot papers and voter intimidation. Was he blind or chose to ignore the events at the collation center having APC bigwigs such as President Muhammadu Buhari, Abba Kyari, Mallam Nasir El-Rufai, Boss Mustapha, Adams Oshiomole among others present to manipulate results in their favour? Hence, the intermediate breaks witnessed in the announcement of election results.

Christians are admonished therefore from the holy scriptures in Jeremiah 23:16. Thus says the Lord of Hosts, “Do not listen to what the prophets are prophesying to you; they fill you with false hopes. They speak visions from their own minds, not from the mouth of the Lord.”

Mbaka speaks not of God and doesn’t represent any godly principles but that of mammon, the day of doom is drawing near for him and all those who worked assiduously in perverting the will of the people at the recently concluded elections, the consequences of their collective actions will be calamitous.

WHY ISRAEL MUST NOT REMOVE BENJAMIN NETANYAHU – A CASE OF NATIONAL INTEREST
civilrights March 2, 2019