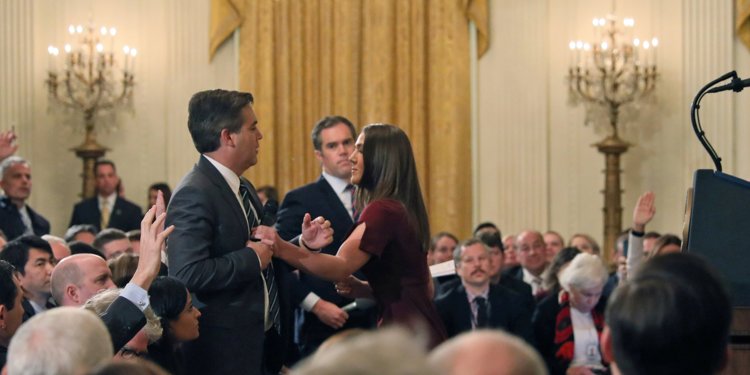 The uproar relating to the reaction of President Donald J. Trump with respect to his encounter with Jim Acosta a #CNN reporter is uncalled for.

The scenario that played out during the whole incident shows that the orderliness and discipline that was supposed to be the order of the day in such a Conference was threatened by the actions of Jim Acosta including his reactions toward the Staff who was dispensing her duty. Jim’s repeated act of interruption during the turn of another Journalist to interview the President is also not welcomed and unprofessional. As the President of the United State of America, Trump has the right to choose the question he answers. More so, it is now very clear that CNN International will never see anything good in Trump’s administration no matter how hard he tries. Like he told Acosta, they should let him run America of which so far he has proven to be doing it well as against the past administration that has nothing to show for their eight years in power and also CNN that has become so unpopular owing to their fake news. President Donald J. Trump does not play to the gallery or pretend and as such will always speak his mind. Banning of Jim Acosta is applauded and it will do America and his administration much good if he has nothing to do with CNN as they will always want to paint him black.

Regarding the issue of immigrants, it should be recalled that this is the same manner following which Muslims invade and took over most Christian countries and President Trump is not ignorant of such. They come in as refugees and next they start taking over the government just like two Muslims won seats in just ended House of Representatives mid term elections. Why aren’t they going to other Muslim countries like Saudi Arabia, India even China and Russia? It is a clear indication of Muslims invasion plan for America.

Americans should support President Trump who has proven to have their welfare at heart. They should not be deceived by Barack Obama and CNN that have no good intentions or plans for America except to embrace Lesbianism, Gay, Bisexual and Transgender (LGBT) practices and witchcraft. Those are all immigrants and machineries to ensure that America is invaded by Muslims. Obama’s administration was very unpopular and unfavourable to Americans, yet CNN approved of him as against Trump who has glaringly made America Great Again #MAGA, it show they are birds of a feather? A former President publicly boasting his alliance with witchcraft, is a shame and a proof that he has no good intentions as well as nothing to offer and yet CNN hasn’t made a statement on that. Americans should not allow these failures of miscreants to jeopardize the so long desired achievements of Trump in America, they are fading away, drowning and are gasping for air.

Tags:
Previous Article
Republicans have retained control of the U.S. Senate
Next Article
INTERNATIONAL COMMUNITY AND MAINSTREAM MEDIA LOOKS AWAY WHILE HAMAS PERPETUATE VIOLENCE IN ISRAEL